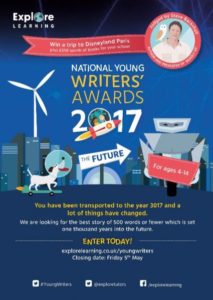 At school we had this competition, the National Young Writers Award, where you had to write a 500 word story about what it might be like in 3017. Here’s my story:

Over the hills, there was an enormous banana milkshake house with a Kitkat poking out of it and who lived in it you ask? Well, only a man called Shakana or as his friends called him Nana. Nana was a Gaygun, a species of human, which can live to be nine hundred and ninety nine million years old. Nana was a kind, elderly worker who sold… yes you guessed it: Banana milkshakes with Kitkat’s in! Shakana also invented a suit (that he used often) called the Inveople. The last Inveople had not done anything, this new one worked when it had been filled up with banana milkshakes. First, let me tell you what the Inveople does; the Inveople makes you really strong and Invisible, when wearing it! Shakana also had the latest transport: the Rhubarb, powered by rhubarb crumble. In all, Shakana was a happy man and got lots of customers because, he made the best milkshakes in the world. He had robots, which sold milkshakes in every town, village or city.

After he’d bought the rhubarb, he decided to swap the Earth and Mercury’s positions so; he could see life develop in different years. However, there was one problem: he would wipe out all the organisations on Earth and that would be horrendous!!! Swiftly, he made nine hundred and ninety-nine million, nine hundred and ninety-nine thousand, nine hundred and ninety-nine litres of rhubarb crumble. When he had stored it all in the fuel tank of the rhubarb –it can fit anything in- he let the Earth in. Although afraid, the people on Earth, stupidly, didn’t try to do anything. “THIS IS BAD!!!”Everyone was saying. Everywhere was chaotic. Even though, the world was about to end, lots of people tried to get on with daily life. They did it to get enough money to make rhubarb crumbles to power their rhubarbs and to calm down. Everything was being sold; people were crazy but every one decided to get one thing especially: the Producer. The Producer produces anything in an instant and’s very small and handy.

Well, because everybody was buying a Producer all was bad; people had to make more Producers by using a Producer to make a Producer to give to the people without a Producer. The stalls were nowhere near as chaotic except all Nana’s milkshake stalls. You couldn’t get any in Producer’s because they were too hard to make, so everyone was buying them. Anyway, Shakana was having another problem, he couldn’t move the Earth or Mercury. Thank goodness, the worlds were saved, which was an enormous relief for everyone as they could live on. Shakana was furious so he packed up and decided to go to Mercury with his milkshakes for aliens (aliens love milkshakes.)

Shakana knew that aliens loved milkshakes. He got into his fully loaded (so he thought) rhubarb and it wouldn’t go. He tried again. Nothing. He checked the fuel, empty. His storage of rhubarb crumble? Empty. OH NO…

4 comments on “The Planet Problem” so far